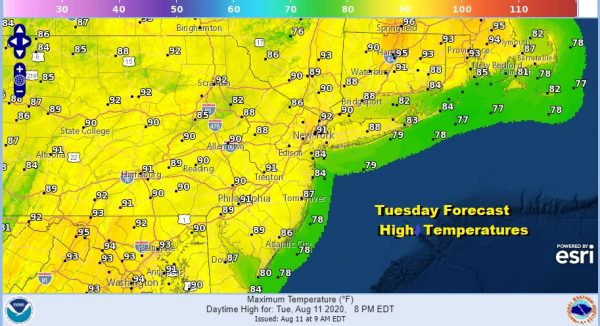 It is another day of heat and humidity as the August dog days roll on. Today’s highs will reach the upper 80s and lower 90s with temperatures a little lower along the beaches. Look for the chance for a scattered thunderstorm that could pop up along a sea breeze front along the coast and also well inland. They should be few and far between but just be aware that we could see one.

The satellite and radars are quiet this morning as there are just some scattered clouds around and the radars both regional above and locals below show very little going on. Again later today a few stray cells should bubble up. The humidity remains very high with dew points in the 70s which is just awful.

We do have a cold front to our west that will be slowly moving eastward and it should arrive later in the day Wednesday. This will be another one of those fronts that won’t have much with it but it will slow down and stall out over or just to our east, complicating matters for the rest of the week. Tonight is another warm and humid night with lows in the upper 60s to mid 70s. Wednesday will be very warm and humid but temperatures should be a shade lower with highs in the upper 80s  to around 90 and we will throw in the chance for an afternoon scattered thunderstorm. 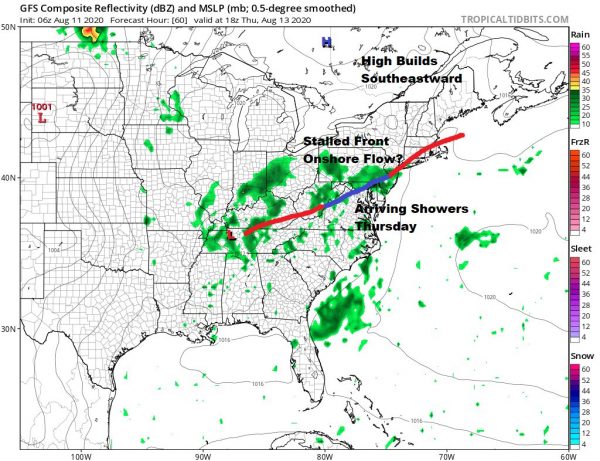 A stalled front, a developing wave and high pressure building southeast from Canada will make for a rather cloudy warm humid Thursday with highs into the 80s. The wave will head northeast and bring up some downpours and some thunderstorms later in the day into Thursday evening.

There has been a tendency for troughs and rather deep ones to drop into the Eastern US lately. Two such troughs were responsible for bringing up tropical storms up the East Coast (Fay. Izaias). This time around at least for now there are no tropical storms around but a dropping trough in the East this weekend and another early next week will make things problematic weather wise.

With troughing in the East there will be greater opportunities for rain on and off from Thursday right into next week. It won’t rain all the time. Winds will tend to be from the east and that should temperatures down. Thursday’s highs will be into the 80s and then upper 70s and lower 80s Friday and through the weekend.

The wet pattern could be good for a few inches of rain for some areas but as always in the summertime, there will be variability in rainfall amounts.