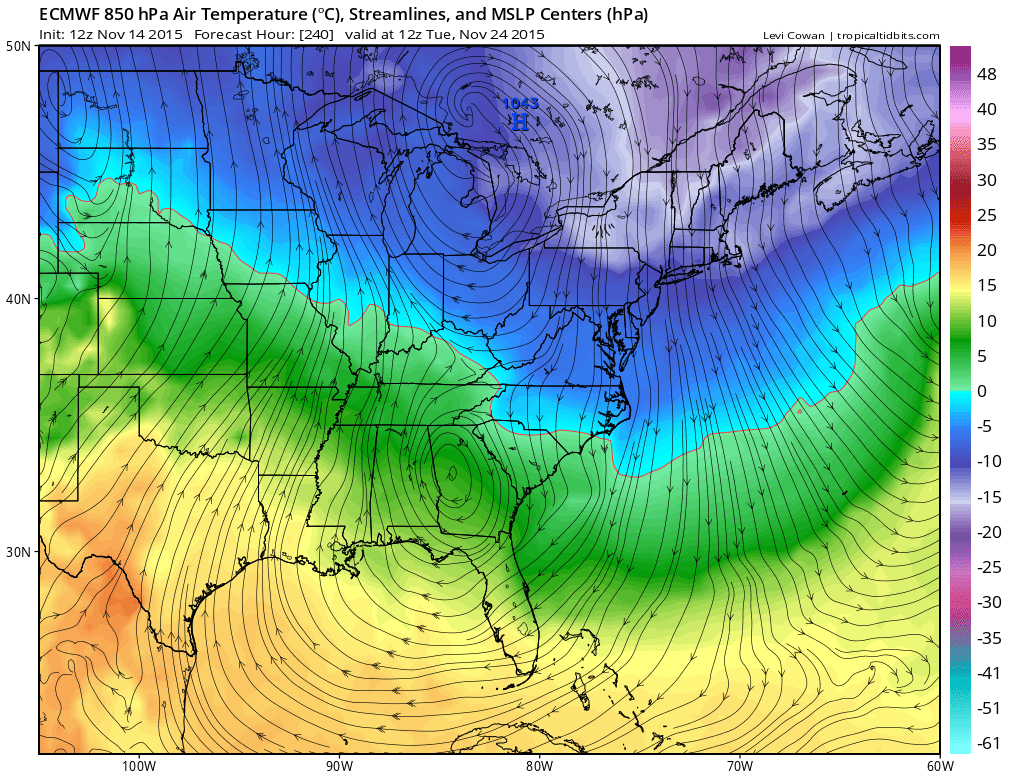 There have been enough run of models over the last few weeks that it looks like the pattern change that we have been following is going to happen. There however remain a whole host of questions regarding this. It seems like temperatures will be normal to below normal at times from Thanksgiving week and possibly a bit beyond that. This is within the scope of the 2 week long range time frame. After that we deal with the question of whether the shift is temporary or something more long lasting. We will deal with that issue in a speculative nature.

The other issue is in regards to potential storminess. This is the tougher question. We have been a drier than normal pattern and it remains to be seen whether that part of the pattern breaks down or not. It seems that we have been seeing more opportunities for precipitation lately but there have not been any nor’easters or major storms in the east for quite awhile. So far there is no real sign of that changing.

With regard to the North American Oscillation and the Atlantic Oscillation today’s ensembles were a little more divided after they peak in a few days. Members trend to zero and then it looks like there is an equal split between those going negative and those going back positive. Remember a negative index means blocking and colder weather (in general) and there would be other implications from negative readings regarding storms, storm tracks, etc etc. We will monitor these indexes daily to see if we can get further clues.

With regards to the Pacific North America pattern which is read in reverse. Positive values mean colder weather in the east and the members continue to trend toward the neutral to slightly positive area of the graph. The PNA confirms the models movement to a colder pattern.

Other models this afternoon also show a colder look. The European gets to the same place the GFS does by early Thanksgiving week with a shot of cold air moving in. The map below is the surface map with the 850mb temperatures. The zero line at this level is close to where the rain snow line is usually but snow is not an issue here. You can see the cold temperatures aloft over the northeast and they come after a cold front moves through late next weekend. 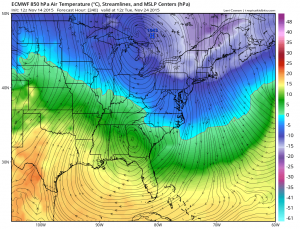 The adventure continues. Again I want to emphasize that the key to whether this is temporary or not will depend on whether the vortex that forms in Canada holds, and whether the vortex over the northwest Pacific doesn’t set up again as the dominant player. These are questions we won’t know the answers to for another week or so at least.

Some interesting developements regarding El Nino. First off the regions we are looing at are 1+2 which are in the eastern Pacific near and off the coast of South America. The other is regions 3+4 which is in the central Pacific closer to Hawaii. When the el nino 1+2 is stronger with the El Nino east based (see 2011-12) winters here are warm wet and relatively snowless. El Nino’s centered in regions 3+4 tend to favor snowier colder winters in the east when this portion of the El Nino is strongest.

El Nino 1+2 (east based) showed a peak in August followed by a sharp decline followed by a secondary peak which is below the first. We thought 2 weeks ago that the top was in but we have been proven wrong. In the past there is usually a secondary peak and it appears we may be there now. We will look to see if that is the case in a few weeks. If it is this will lend strong evidence to the argument for a colder winter. Below is the chart for region 3+ where the strengthening there continues unabated. Water temperatures there are more than 2 degrees Celsius above normal and no sign of a top.

One of the take aways I got from looking at prior el ninos is that direction of trend may be more important than the departure from normal. In 2011-2012 the el nino was much weaker. However it was east based and began in October and did not peak until March. Magnitude didn’t seem to matter. This time around if the downward trend in the east begins, it could be that magnitude may matter less than the trend. Again we will continue to monitor this and take another look at the end of the month.

GALE WARNINGS FOR THE COASTAL WATERS