We have Winter Weather Advisories that have gone up for much of Upstate NY and into New England including Southern Connecticut north of Route 15 and in the Hudson Valley from Dutchess and Ulster Counties northward. This is being caused by a weather system basically sliding southeast across Pennsylvania to the New Jersey coast. For now NYC, Long Island, Northern New Jersey & southern areas of the Hudson Valley outside the Winter Weather Advisory area.

This is not to say that the areas just south of the advisory area are not going to get snow. Light amounts of a coating to an inch or two will extend southward to about NYC and Northern New Jersey and then sharply cut off to a coating just south of this area and to little or nothing south and east of the New Jersey turnpike.

Over New Jersey that is covered by Mount Holly you can see their view shutting the snow off south of Route 195. This is the sort of situation that could shift slightly further southeast so we will be watching for that possibility. However the upper air profile here is rather weak and it is hard to see much upside happening from this system.

Winter Weather Advisories are not up yet for Northeastern Massachusetts but this will probably change in the morning due to a later start time. A general 3 to 4 inch snowfall is indicated here and if Boston gets what is predicted, they may finally move head of NYC in the annual snow totals by breaking the 10 inch mark. 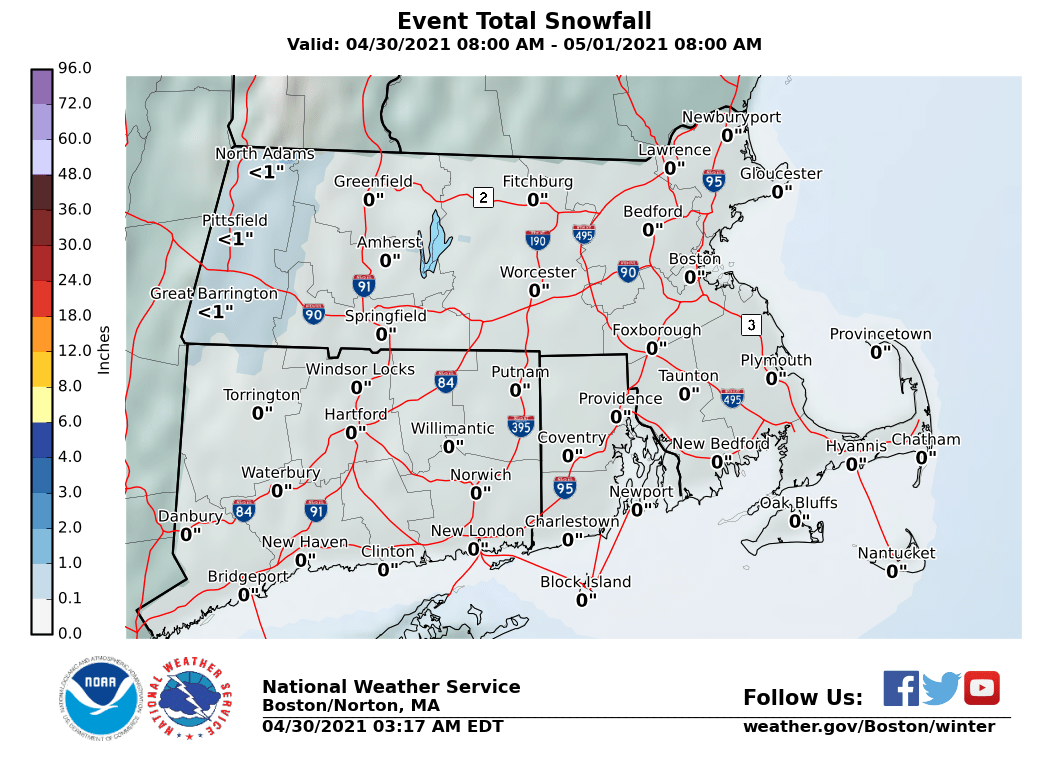 For a change Maine misses out from this system with almost the entire state except the extreme southwest gets nothing. The southwest area is on the edge of a coating to at most an inch.

Through Western New England and Northeastern NY lower amounts will be north toward the Canadian border and then amount increase as you head south through Southern Vermont and the Southern Adirondacks. 1 to 4 inches looks like a good range for this area.

The Middle Hudson Valley looks to be in a bit of a sweet spot here as far as snow accumulations are concerned. A general 2 to 4/3-5 inch snowfall is being indicated by the National Weather Service here though I would tend to lean to the low end of the range here.

This area could see a max area of 6 inches as you head north toward I-90 with amounts dropping somewhat to the north and to the south. Amounts drop considerable to a coating to a couple of inches in Northeastern Pennsylvania.

Western New York gets several inches out of this as well with lower amounts in North Central NY on the east shores of Lake Ontario. This is gentle compared to the strength of snow squalls during times when the lake effect snow machine is turned on. No lake effect here but just a general light widespread snowfall.

The snows that are indicated here are with another weak weather system that will be moving northward from the Gulf States Thursday night into Friday morning. If this area holds together, a coating to a couple of inches is possible here.