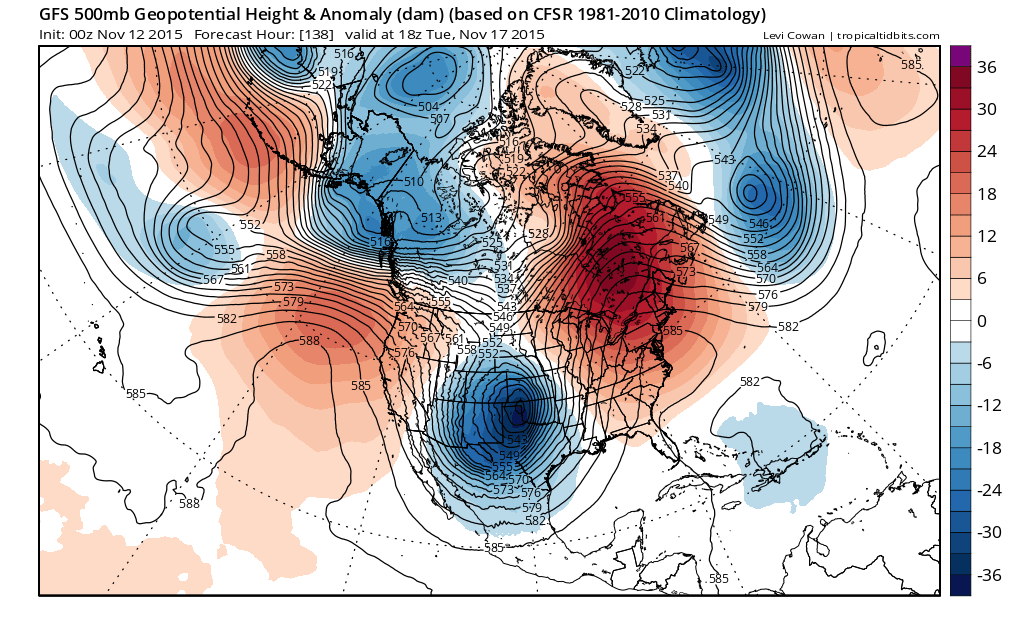 Even though the pattern remains relatively warm in the east, the jet stream pattern continues to become more active. The main features remain the same pretty much for the next 6 days with a deep trough in the west and a strong ridge in the east. Now this is not present all the way through during the six day period taking us through next Tuesday. Early in the period there is a strong storm over the northern Great Lakes which is bringing a cold front through here today along with a few showers. The main energy with this is going well to the north of us so the showers should not be a big deal. This is is the first time in months where we are actually seeing rain twice in one week which given how dry the pattern has been is unusual alone. Whether this is the beginning of a more active long term pattern remains to be seen however we can say that after this system moves through today the weather will be tranquil into the first part of next week.

Once the upper trough pulls out you will see a very powerful ridge builds in the east which is in response to the model developing a very deep trough west of the Mississippi. If the model is correct than this all makes perfect sense given how everything lines up in the atmosphere, at least for now. If you look up near Alaska nothing has changed up there. The polar vortex remains well west and north of its normal position which continues to effectively cut off any cold air access from the polar regions into Canada and the lower 48. Beyond this period the model begins a gradual transition to a colder pattern but I would caution that the GFS model has been doing this on and off for over week only to keep pushing the time frame back further and further into the month. There were hints from all the weather models today that the polar vortex is going to begin to break down and a temporary alley way would open up to allow polar air to flow into Canada and eventually the United States. For now the best course is to remain skeptical of this until we start seeing this show up inside the 10  day forecast period. Much will depend on the signals in the Atlantic and whether the North Atlantic Oscillation winds up going from positive to negative in the next 2 weeks.