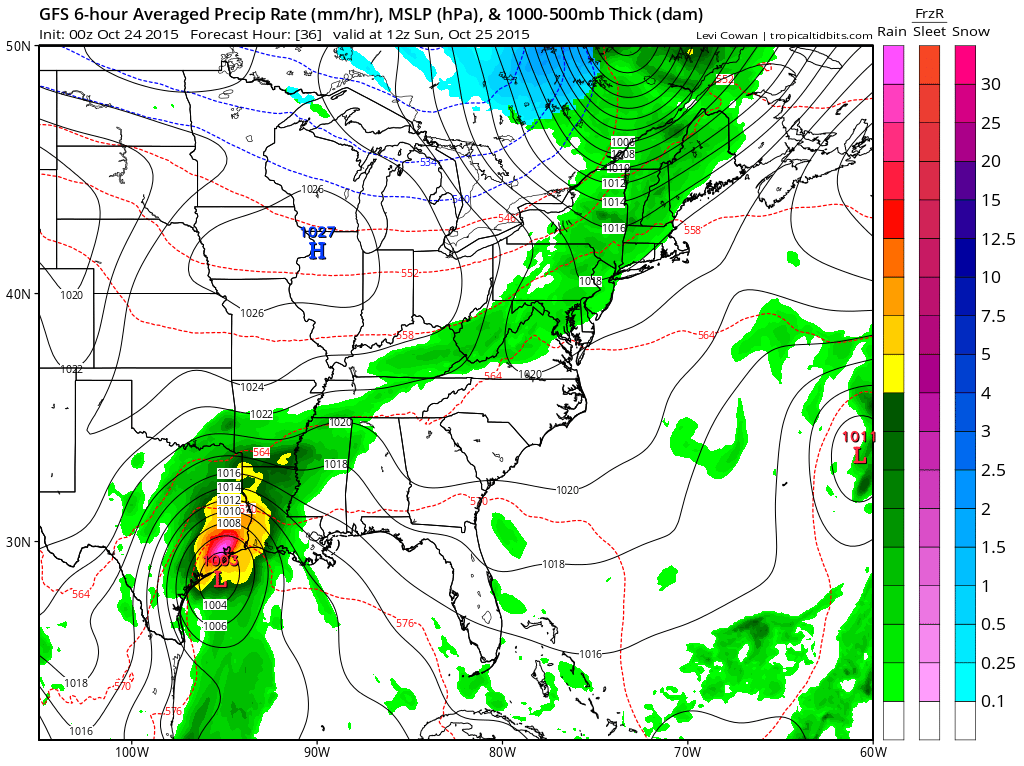 Weather forecasting models are all very consistent with the next 5 days. Today’s forecast is relatively easy for us as we will start with sunshine however some high clouds will come in an mix with the sun during this afternoon from west to east as a cold front approaches. Meanwhile down in the Western Gulf States low pressure will develop in South Texas. It will combine with whatever is left of Hurricane Patricia and heavy rains will develop across South and East Texas and then spread into Louisiana on Sunday.

Whether the low is tropical or not there will be gusty winds along the coast thanks to a relatively tight pressure gradient. The tropical nature of this system is really not very relevant to our area as eventually even if this were to become tropical it will quickly become an extratropical system. You can see the low along the Texas Coast and you can also see the cold front moving through here Sunday morning with a few showers. Much of the shower activity is forecast to weaken during the morning so rainfall amounts here should be a tenth of an inch or less. High pressure builds behind it and skies should begin to clear out Sunday afternoon. Another chilly air mass builds in setting us up for 2 dry days Monday and Tuesday with sunshine though clouds will be increasing later in the day Tuesday. Temperatures are not going to get out of the 50s on both those days. 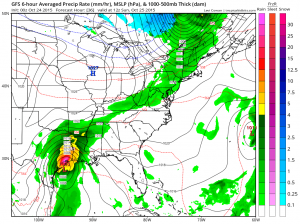 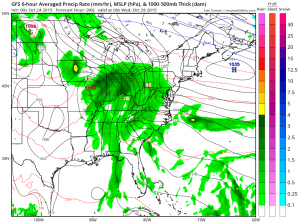 I’m jumping now to Tuesday night as we have low pressure near St Louis heading northeast while the high sets up a strengthening easterly flow which should feed in some Atlantic moisture into all this. Rain should arrive here Tuesday night and hopefully after midnight and after the Mets win game 1 of the World Series. 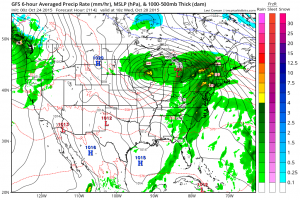 By Wednesday afternoon the low moves from just south of Chicago to Detroit. Rain is still going on here and should continue into Wednesday night before ending. The hope is that we get a solid 1 to 2 inches of rain out of all this and the GFS model does produce that with heavier rains north and northwest. 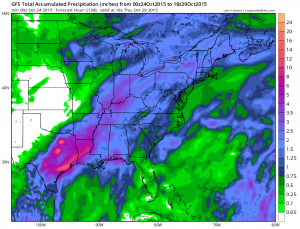 The big rains from Patricia are left for Eastern Texas and Louisiana and the gfs model does produce 6 inch plus rainfalls there which is no surprise. The variable in all this is how much of the core tropical moisture gets involved with whatever develops in the Gulf of Mexico. There is an outside chance this system could briefly gain some tropical characteristics  but it will be moving to quickly inland to really matter over the long haul. All the models seem to be fairly consistent with this view. The NAM model might argue for clouds to move in Tuesday faster as the onshore flow develops by Tuesday morning so we will have to consider that possibility given the easterly flow that sets up with the high to the northeast.

Download my weather app for specific forecast for New York, New Jersey, Eastern Pennsylvania, and Southern New England. The app is free and a subscription is just 99 cents a month.