While we have a certain amount of confidence in the outlook for the next several days a large amount of uncertainty has crept in for the latter part of this week. It involves a tropical depression which this morning is in the Northwest Caribbean. This is going to become Tropical Storm Michael later today and it could have impact on our weather later this week. More on this in a moment but first we are dealing with clouds again today though we should break out into some sunshine at some point. It will be a warm day as we reach the upper 70s and lower 80s for a high. There is a cold front approaching from the northwest that will move through tonight and there could be a passing shower or two with that.

We are not seeing very much on the radars this morning and we don’t expect this weather front to create much disruption as it moves through tonight. Another high builds in to the north of us on Monday and this high strengthens creating an onshore flow, clouds and temperatures in the 60s to lower 70s. Tuesday begins a shifting of the high to our south and brings in warmer and more humid conditions. 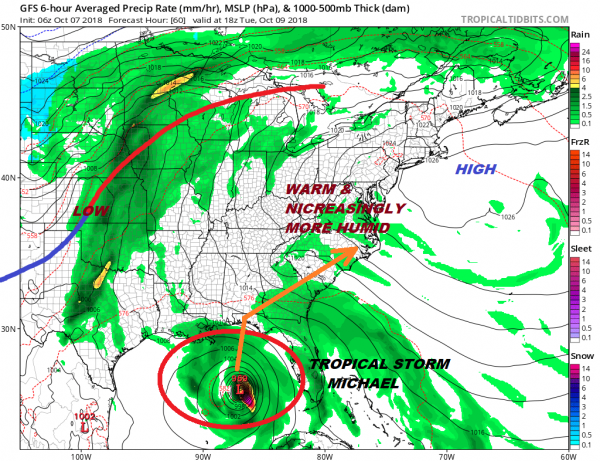 Tuesday also brings what at least will be Tropical Storm Michael toward the Gulf coast and it appears it will be making a landfall somewhere between the Mississippi Gulf coast and the Florida Panhandle. This is where the questions regarding impact here become blurred somewhat. The driver here is the upper high off the East Coast which begins to weaken and a strengthening trough to the west which will be moving in to give this system a hard kick to the northeast. 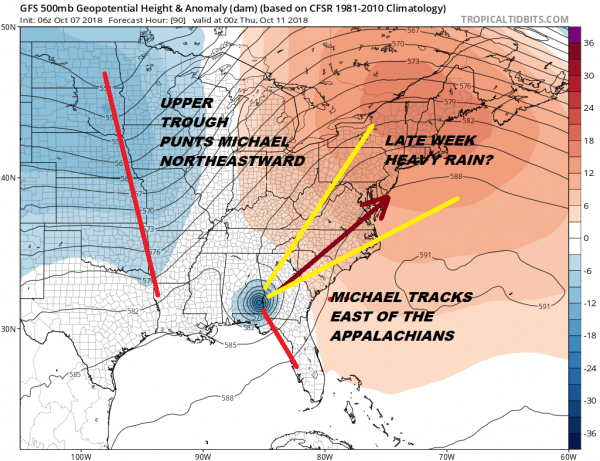 Timing here is crucial with the longer it takes to make landfall, the more likely the track of the system will be further west and impact areas further inland with rain late this week. This will include bringing heavy rains to the Carolinas and Virginia which are still recovering from the epic rains of Florence back in early September. The good news here is that even in a worst case scenario, the system will be moving rather quickly and there is no chance of stalling. We are are talking about a 6 to 8 hour period of heavy rain which limits rainfall. We may also be dealing with some wind with this as we will see any remnant low be it tropical or post tropical to interact with the deep trough swinging east. Obviously these are all variables that will change and adjust going forward. We don’t have any real issues other than clouds into Wednesday with daytime temperatures Tuesday and Wednesday in the 70s. Rain from all of this will be for later Thursday into Thursday night. 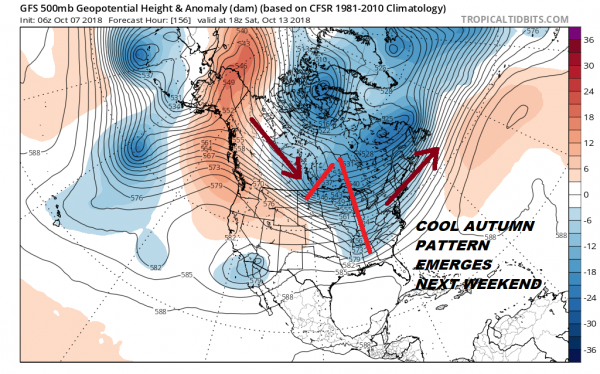 One thing that emerges from all this is a significant change in the upper air pattern. The ridge in the Eastern US completely breaks down and a broad deep trough replaces it and it will be hanging around for while. Beginning next weekend we are going to be experiencing cooler than average conditions. Long range models suggest this pattern could last for awhile but we will reserve judgement

PATREON MEMBERS WILL GET A LIVESTREAM THIS MORNING AT 9:30AM EASTERN TIME

SUBSCRIBE TO PATREON FOR A WEATHER EXPERIENCE FREE OF ADS, EXCLUSIVE VIDEOS FOR MEMBERS ONLY AND MUCH MORE…STARTS AT $2 A MONTH..MESSAGE ME AT ANY TIME