A nice day comes to a close even though we have last night’s low offshore and it just sits there doing very little at the moment. It remains tucked in, trapped, and weak. Clouds are lying offshore and some of those clouds will start backing westward tonight. You can thank a high to the north and little onshore flow for that. Temperatures overnight will bottom in the 40s to lower 50s. While that is going on we have a cold front moving east from the Great Lakes southeast to the Gulf States. This front produced widespread severe weather last night from the Mississippi Valley back to Texas including a tornado that touched down in Dallas Texas causing widespread damage in some areas.

That cold front nears Tuesday for us in a weaker state. Tuesday’s front has to deal with onshore winds from New Jersey to New England providing a bit of a marine layer here. That will keep us from getting any thunderstorms but we will see some showers from this front developing during the day Tuesday and lasting into Tuesday night. The front absorbs the offshore low and gets that out of the way so once the front passes, weather conditions will start to improve later Tuesday night or early Wednesday morning.

Rainfall amounts will be higher further north where amounts of three quarters of an inch to an inch or possible.  Otherwise we are looking at a quarter to a half inch of rain is most places. 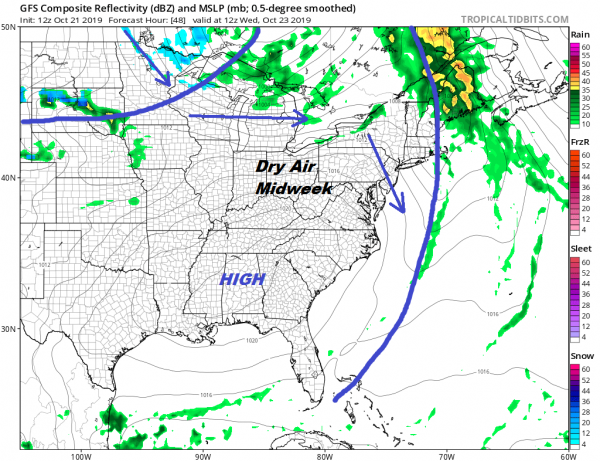 Wednesday and Thursday looks like two very nice days with sunshine both days and highs in the 60s. Nighttime lows will be in the 40s. To the west we have another cold front dropping into the Western Great Lakes. 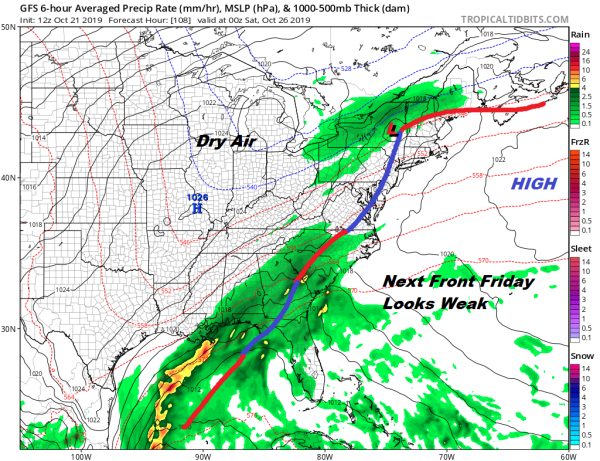 That next front looks to on the weak side. The upper support with this system looks to be weak and the northern part splits away from the southern part. The Southeast US catches some rain out of this but for the Northeast into the Northern Mid Atlantic, we will run the risk for a couple of scattered showers along the way Friday. As long as the front doesn’t seriously stall out we should see some sunshine and Saturday and Sunday with temperatures into the 60s. The upper pattern is entering a bit of a quiet state this weak as far as major storms are concerned. We will enjoy the respite however long it lasts.