A Tropical Storm Warning is in effect for Pinar del Rio Cuba while a Tropical Storm Watch is in effect for…
* Tulum to Rio Lagartos Mexico & * Cozumel. Before too long we will likely see Tropical Storm and Hurricane Watches going up for parts of the US Gulf Coast with Louisiana possibly facing a record breaking 5th landfall this season. Tropical Storm Zeta also gets us almost even with the all time active year of 2005 with 28 storms (one unnamed) and we are up to 27! In 2005 the last storm formed on December 28 so there is plenty of time here for another storm or three. 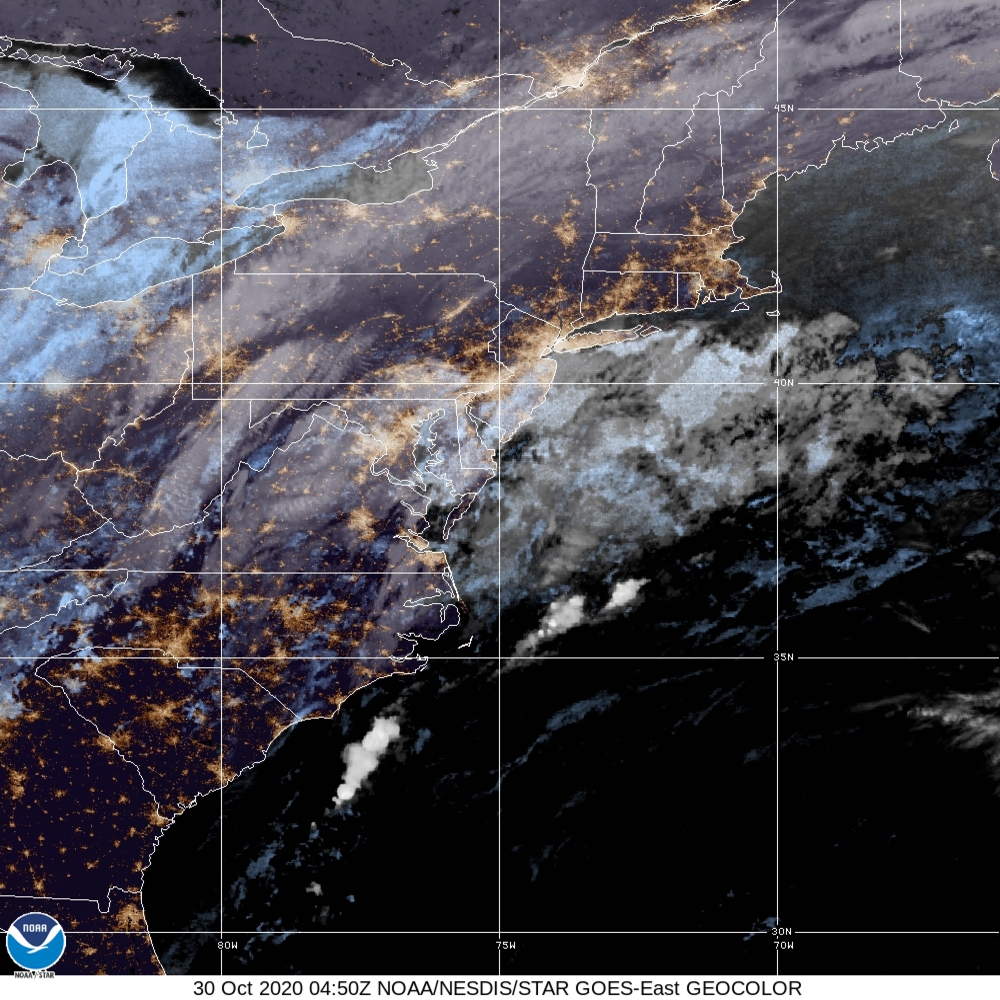 Conditions are favorable for strengthening with warm water temperatures and very light winds in the upper atmosphere so there isn’t much wind shear. We are seeing a rather tight ball of convection as the satellite picture shows us. Nothing seems to be stopping this from becoming another hurricane threat and this may actually bring heavy rains up the East Coast later this week.

All the global models seem to be on board with this idea and it might a solid rain producer of several inches thanks to a tropical rich environment and a solid upper trough that creates a southwest flow along the east coast. All that rain should get up here for Thursday.

Meanwhile we really chilled down overnight with a gusty north to northeast wind as high pressure is building to the north. We may start the day with partly sunny skies but from Southern New Jersey and Southern Pennsylvania southward we are already seeing lots of clouds and rain is on the regional radar from Northeastern Virginia to the Delmarva Peninsula.  This is also starting to be picked up on local radars.

Look for this rain to creep northward today but it is fighting dry air over New England so that may slow it down and weaken it considerably as it moves northward. NYC & Northern New Jersey north and east to Long Island and Connecticut should be dry until after sundown. Areas in New Jersey south of Route 78 will be a bit tricky with that rain creeping northward from Southern Pennsylvania to Southern New Jersey. It isn’t anything of consequence with rainfall amounts likely under a tenth of an inch in most places though we could see higher amounts of a quarter to a half inch Southern New Jersey and points south and west from there. Temperatures today will have a tough time getting much above the low 50s and some areas that get into clouds and rain early won’t get out of the 40s.

Monday through Wednesday will be rather unsettled with a stalled frontal boundary and ripples that could bring some rain from time to time. Monday might be quiet with just lots of clouds and highs in the upper 50s and lower 60s. A wave of rain could move through early on Tuesday and again Tuesday night or early Wednesday. Otherwise it will be more doom and gloom clouds. Highs both Tuesday and Wednesday. After that it will be developing low pressure in the Southern Plains picking up the rains of Zeta and bringing them here on Thursday.