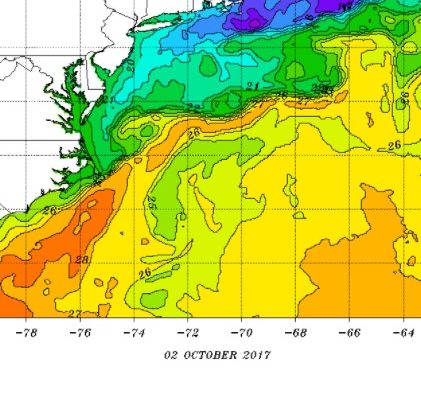 Another beautiful day begins as we see lots of sunshine across the Eastern US but temperatures today will not have to fight a southeast wind off the ocean. Instead with the wind more southwest temperatures will move up and the humidity remains fairly reasonable. Highs will reach the mid 70s to near 80 in most places except for right along the immediate coast where there will be local sea breezes.

Speaking of sea breezes and ocean winds the ocean water temperatures around our area have really taken a big hit from the constant pounding of hurricanes over the last 5 weeks. Usually this time of year we are hovering near or just under 70 but we are actually several degrees below that or even more in some places. Ocean water temperatures just east of Montauk are actually below 60 which is really chilly for early October.

Satellite loop this morning shows clear skies pretty much up and down the East Coast with a weak cold front to the west moving across the Central Great Lakes. This front arrives here Thursday with just a few clouds and a passing brief shower if at all and not much else. Radars are silent today and should remain so into tonight and probably through Thursday.

The front will pass through early on Thursday but with a west wind dry air and sunshine behind it, highs Thursday will reach into the 80s before cooling down Thursday night into Friday. The front stalls out to the south of us Friday so it sets up an onshore flow and some clouds and sun with highs just into the 70s. We will look for the front to go back northward over the weekend putting us in warmer more humid air with the chance for a shower Friday night into Saturday and again later on Sunday. Most of the weekend should be dry with clouds and some breaks of sun with highs in the 70s to near 80.

Attention shifts to the Southwest Caribbean where disturbed weather has become better organized overnight and it appears that a circulation may be developing here. An Air Force Plane may investigate this area later today. Watches and Warnings may be required for Western Cuba. Weather models move this system northwest and then northward eventually emerging into the Gulf of Mexico. Hurricane tracking models are now showing a wide spread in tracks and some are shifting eastward like the European model which has consistently indicated a track to the Eastern Gulf of Mexico rather than the Central Gulf. We should watch this system with some interest because the moisture from this could come up the East Coast early next week and bring the first widespread significant rain we have seen in the last few months. It has been particularly dry since early September with some places hardly seeing a drop of rain. If this system develops into a tropical storm or hurricane and moves inland it would need to track east of the Appalachians in order for us to see significant rains from this. Weather models all see to develop this into a tropical storm with a few taking it to minimal hurricane before some sort of landfall early Monday. The risk area would appear to be from Southeast Louisiana eastward to the Florida Panhandle.