We are watching a cold front moving through the Northeast and Middle Atlantic states today with an area of clouds extending south from Eastern Canada into Virginia. The system is not particularly strong but it will do its job of changing air masses. The front extends southward into the Southeast US where it is much weaker with very little shower activity there. Then it expands in the Western Gulf Coast where we see lots of clouds and subtropical moisture. From this area will bloom a low in the Gulf of Mexico that will become a coastal low Tuesday and Wednesday off the Carolinas. For now though we focus on the showers for today.

Radar is showing a north south line with some showers and the odd heavier downpour in the mix moving east and they are showing up on our local radar views below. The rainfall amounts from this system will be on the light side as most areas will finish with a quarter of an inch or less of rain. The back edge of the rain is already into Eastern Pennsylvania and will move across the area from west to east during this afternoon and evening. Temperatures will settle into the 50s with the rain falling.

Weather conditions improve tonight as skies clear with temperatures dropping into the upper 20s to middle 30s which sets us up to a chilly start to the month of April. Sunshine is in the forecast for Monday and sunshine giving way to arriving clouds for Tuesday. Highs both days will be in the upper 40s to lower 50s. Then attention turns to a coastal low moving northeastward. 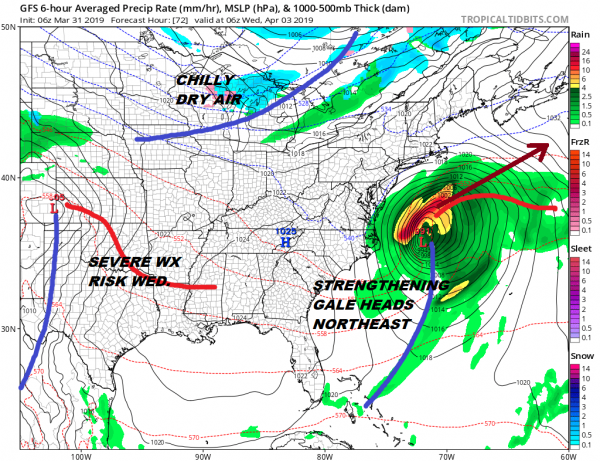 There isn’t much that has changed regarding how this developing low off the Southeast coast will behave. It looks to strengthen as it moves northeastward There isn’t much room for this to move northward closer to the coast. There is a general lack of storminess in the Atlantic which favors this system to move out more to the East than anything else. Clouds will be the main issue here late Tuesday into Wednesday morning before the system pulls way to the east. I would expect Wednesday and Thursday to be on the chilly side behind it with clouds and some sunshine both days and highs probably in the 40s to lower 50s on average. There is a system that will be coming out of the Southern Plains which will begin to spread severe weather risk across parts of the South beginning Wednesday. 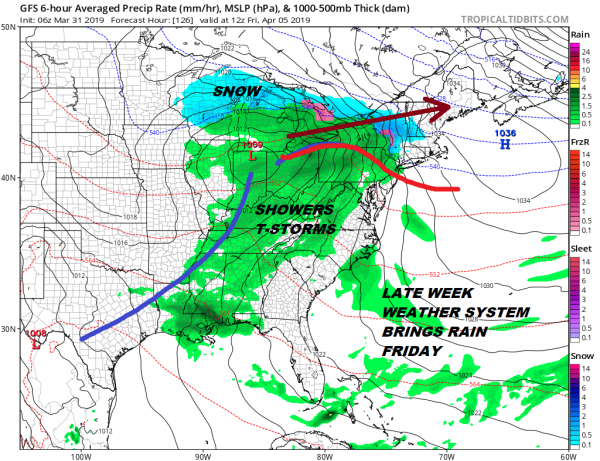 This looks to move into the Northeast at the end of the week with the chance for rain or showers developing Friday. This system seems to be coming in a bit faster so if that is the case it moves out faster and leaves us with decent weather next weekend.