The remnant low of Tropical Storm Fred remains very obvious on the satellite view. The large swirl of clouds is well inland with the surface low is in Northern West Virginia. This sets up for rain mainly west of the I-81 corridor well inland. Rainfall amounts are heavy enough to cause flash flood issues and we have flash flood watches up

The rain tails off to the east of I-81 on the east side of the remnant low track and that introduces severe weather risks later today inside that warm humid air mass that covers Eastern Pennsylvania to Southern New England.

The Storm Prediction Center has raised the risk area to a slight risk for severe weather late today into this evening much of Central Pennsylvania south to Maryland with a marginal risk extended east to just inland of New Jersey and into Western New England and Upstate NY. Those risk zones come with a 2% tornado risk in the marginal zone and a 5% tornado risk in the slight zone area.

For most of Eastern Pennsylvania to Southern New England it will be a very warm and very humid day with some breaks of sunshine taking temperatures into the 80s and the late today into tonight we will be on watch for Thunderstorms. Fred’s remnant low will move to our north tonight and Thursday leaving the area in leftover clouds warm and humid conditions tonight with lows in the upper 60s and lower 70s.

Thursday with the low to our north we will get a bit of drying and that should allow for more sunshine in the picture. It will be very warm and very humid and we will watch for scattered thunderstorms late in the day and in the evening. Highs will be in the mid to upper 80s. Friday should be another very warm and humid day with some sun and highs reaching the low and middle 80s. Watch for a pop up shower or thunderstorm. 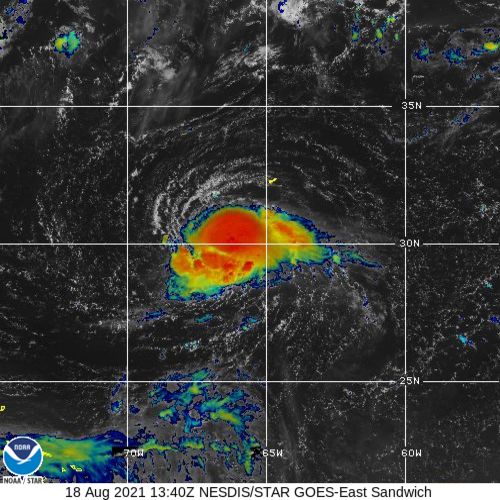 Attention over the weekend will be on Tropical Storm Henri. It hasn’t changed much overnight with max winds of 65 mph. There is some shear getting into the system but it appears that Henri will hold its own as it tracks west today and Thursday. Henri should make it inside 70 degrees west longitude by this time Thursday. That is the benchmark where we should be paying closer attention.

The issue as always is complex and involves the interaction of 4 players here. We have Henri off the Carolina coast offshore. We have an upper trough forming over the Great Lakes Friday and a forming weak cut off low that drops southeast into Ohio and West Virginia. Third is the trough in the Northern Plains with is shearing northeastward into Central Canada. By not coming eastward it leaves the upper low in control of the fate of Henri. Finally we have a ridge that is building into New England and that creates a southerly flow just offshore.

Also part of this equation is the strength of Henri. Conditions will become favorable for strengthening Friday. The stronger Henri gets, the better chance the storm has of tracking further offshore. If it stays as is or is a little weaker than Henri gets further west before making the turn. How the upper trough interacts with Henri and the strength of the ridge building in New England will be the drivers here. The GFS model is the furthest left of all the models and has been very consistent in taking Henri to Southeastern New England with a pass over Block Island. Other models are going in several directions. The European model this tropical season has just been awful in how it has handled tropical storms so we are going to discount its solution of weakening Henri completely. That seems unreasonable. Hurricane tracking models have also continued to adjust westward and we now have a few models taking tracks that at least put Southeastern New England at risk.

With all these variables in mind we are monitoring all of this with interest. In the meantime let us say that  the weekend will be warm and humid with highs in the 80s, the risk for scattered downpours or a thunderstorm is in the mix for both weekend days, and in the meantime we will monitor the situation carefully with regards to Henri.