Lorenzo has come off its record setting category 5 status from Saturday night. Lorenzo was the strongest hurricane ever observed in the Eastern Atlantic. The large hurricane is spreading large waves across much of the Atlantic Ocean and we may actually see some waves reaching the Northeast coast at some point. The hurricane risks are growing for the Azores and Lorenzo is forecast to pass at least close enough to the Azores that they will experience hurricane conditions later Tuesday into Wednesday. 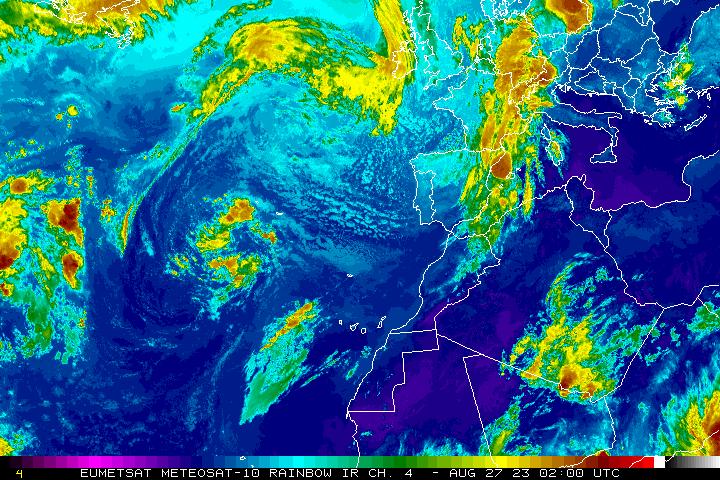 Lorenzo stands out on the wide satellite view where you can see the storm from the perspective of the Canary Islands and the northeast coast of Africa on the lower right and Europe on the upper right. The tiny Azores lie between the hurricane and the British Isles and they are first in line here for some impact.

The eye is ragged right now as it has come well off its peak strength. The circulation however is well defined and has a very strong signature on the satellite pictures both on the tight and wide shots.

Lorenzo will pass near or just northwest of the Western Azores Tuesday night into Wednesday morning but the large circulation and the expanding area of gales will spread hurricane conditions to the east and tropical storm conditions to the easternmost Azores. From there the track becomes highly uncertain as models struggle with whether Lorenzo gets captured by a developing storm in the North Atlantic, or does it remain a separate feature and tracks close to Ireland on Thursday.

There is still a wide spread on the hurricane tracking models with about 1000 mile spread on the furthest southeast track to the furthest northwest. This will all come down to the strong upper low in the Atlantic and whether it picks it up and rotates it northward and norhtwestward away from Europe, Britain and Ireland.

This is how the GFS and some of the other global models handle Lorenzo. It is likely that Lorenzo will be post tropical or more like a winter type ocean storm by the time it gets close to the British isles or Ireland. The time frame for this would be Thursday into Friday. We will see where Lorenzo takes us regarding whether there is a tropical core of some kind left at these high latitudes. If the storm rotates northwestward impact on the England and Ireland would be minimal.