Here we are at the end of April and on its last weekend we are experiencing colder than average conditions. The month overall has actually been warmer than average by a degree or two. It just seems everyone has this idea that spring means instant and continuous warmth and it just isn’t the way things work. The flexing of muscles from the dying colder patterns of winter flare from time to time and they create conditions far from ideal.

The tele-connections give us a snapshot of what the issues are. The Pacific North America index is negative which means a ridge in the East. Now that would mean warmer than average temperatures but there are two problems here. The North Atlantic Oscillation or everyone’s favorite Greenland block is negative meaning we have higher than normal pressures in the North Atlantic and that deflects the jet stream further south across the East. So you have two things basically working against each other. The East ridge wants to build and the NAO wants to suppress it keeping it colder. This sets up the battleground. 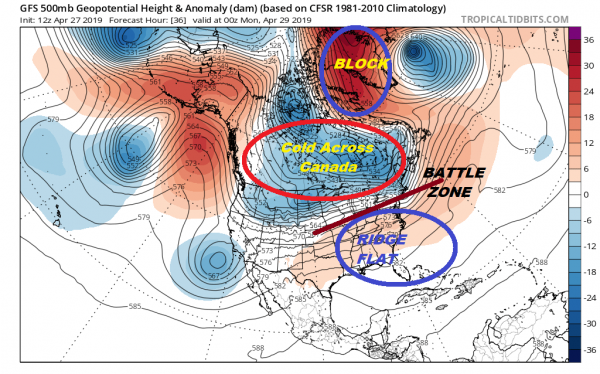 The last part of this is the East Pacific Oscillation which is off the wall negative which is keeping all of Canada cold as we move into next week. This sets up a zone between the flat ridge to the south with warmer air coming northward and the colder air to the north pushing southward. This will be the story for all of next week. The good news is that the block in the Atlantic is weak and breaks down next week as the other tele-connections show changes though the EPO takes its time coming back to the neutral zone.

This is what it means for next week. A frontal boundary is stalled to our south with 3 waves that we will have to deal with. The first is Monday night into Tuesday with some showers. Tuesday night into Wednesday night brings the second wave which will cause that stalled front to buckle somewhat. The high to the north means onshore flow here. Friday brings system number 3 which should be the last in the series. It doesn’t rain straight through this week but other than Monday don’t expect much to happen as far as nice weather is concerned this week. While we deal with an onshore flow much of the time, south of the frontal boundary it is blue sky sunshine and temperatures in the 80s. Virginia south will be the place to be. The good news however is that the pattern does break which means next weekend will be nicer and a bit warmer and the onshore flow pattern breaks down and disappears at least for awhile. We will be in a pattern where weather systems will move along in a more normalized flow and this will let us string a few decent days back to back.