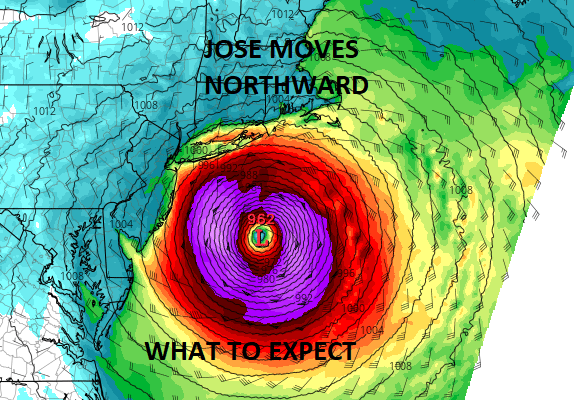 SUMMARY OF WATCHES AND WARNINGS IN EFFECT:

Hurricane Jose is off the East Coast and moving northward. Air Force recon reports show Jose a bit stronger with winds of 90 mph and a pressure of 967mb. Jose has been expanding in size as it moves further north. While still a tropical cyclone it is beginning to look like some non tropical elements in the atmosphere are starting to get involved. The south side of the cyclone has less weather while the gales and area of rain to the north, northwest and norteast seem to be expanding a bit. Jose IS NOT going to be a landfalling hurricane but rather it will be much more like a mid fall to mid spring noreaster when we begin to see the effect from this.  We anticipate Tropical Storm Watches to be posted for the coastal areas of New Jersey to NYC to Long Island, Southern Connecticut when the 5pm advisory is put out.

As for the rest of this afternoon it is very warm and very humid out with tropical air overhead. A few isolated downpours are showing up in a couple of spots but they should not amount to much nor last too long in any one location. Most of you won’t see much. Warm and humid conditions continue tonight with patchy fog again and temperatures in the 60s to near 70. Monday we will see some sunshine and more of an ocean wind. Temperatures will be in the 70s in most places.

WHAT TO EXPECT FROM JOSE TUESDAY INTO WEDNESDAY

Weather conditions will deteriorate late Monday as winds begin to increase along coastal areas. Some rain will probably swing northwestward from the southeast and push inland as an outer band moves through. Then there could be a break before steady rain comes in Tuesday night into Wednesday. Here is how it breaks down in general. THIS IS NOT GOING TO BE A DIRECT HIT BY A HURRICANE!

The worst conditions will be in New Jersey east of the Garden State Parkway southward from Monmouth County down to Cape May. Lesser issues north and west of here.  Winds along the coast will be 20 to 35 mph with some gusts to 50 mph possible later Tuesday into Wednesday morning. Coastal flooding will occur at high tide and right now we expect moderate coastal flooding as winds will eventually go around to the north and northwest pushing the water out. This is not a case where the system is making landfall from the southeast.

This area will lie on the edge of the stronger winds and heavier rain. Winds will be 20-30 mph with gusts into the 40-50 mph range at times. After the first band of rain Tuesday morning and a break, a second period of steadier rain and wind will occur into Wednesday morning.  Again this is much like a noreaster. Coastal flooding at high tide is expected and it should be moderate in nature.

Here is where things get a bit rougher with heavier rain and stronger winds. The winds and rain will increase as you go eastward. 20-35 mph with gusts to 50 mph possible on the Nassau County south shore. Coastal flooding at high tide is likely with an east to southeast wind eventually going northeast and then north or northwest during Wednesday.

This area seas the worst of it. The potential for several inches of rain exists with strong winds of 30 to 40 mph with gusts possibly to 60 mph or more along the immediate coast. The worst of it will be Tuesday night into at least part of Wednesday. Coastal flooding is likely. Weather conditions here will be slow to improve and may not until later Wednesday.

NEW JERSEY WEST AND NORTH OF THE GSP & WEST & NORTH OF NYC, HUDSON VALLEY, AND CONNECTICUT NORTH OF I-95

This area should see the least of it though there will be rain and some wind, and it may get rather gusty at times, it should be manageable for the most part. Rainfall amounts here will be tapering off as you go further north and west. I don’t anticipate any unusual issues for this zone.