JOESTRADAMUS has been really been confused and perplexed over the last week as every single run offers a completely different outcome in the longer term. I believe what is happening is that you have a wide range of normally dominate signals all at one extreme or another. As a result each model seems to key on one particular idea and it runs with it. The other frustrating thing about all this is that each global model seems to flipping back and forth from run to run and supporting another model with a previous solution! In other words, the models are in a mess. Here is an example of today’s latest runs and what they did. 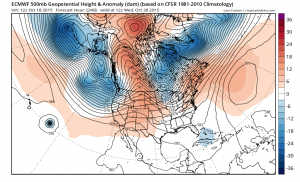 Here we have today’s European at day 10 which is for Wednesday October 28th. We have a trough off the west coast, a trough in the Great Lakes which is not very deep, and a ridge in the Atlantic east of 60. It pretty much suggests a progression of cold fronts, none of which has anything particular out of the ordinary in terms of daily weather. Above normal a few days followed by showers, followed by a little cooler. 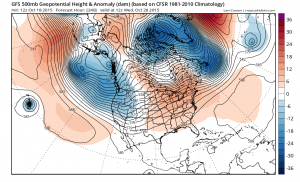 Now we have the GFS model which is totally different. It has a trough along the west coast with a vortex way up in Canada and a west southwest flow of what would probably translate to milder than normal conditions without much rain. The look from the European is much different in both the Atlantic and Pacifc oceans as these models are driven by the El Nino on the Pacific side and the Arctic Oscillation on the Atlantic side. The Canadian could split the difference or maybe take a side where you could say, okay its 2 against 1. But then it comes in with this look. 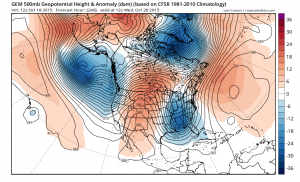 The Canadian decides to wrap up a low in the Gulf of Alaska which flies a ridge up the Rockies and then drives a very deep trough along 90 west. Throw in a tropical storm east of the Bahamas and you have a very active view with all sorts of nor’easter implications! So there you have it. Three models..three different ideas..and absolutely no clue if any one or all of them are wrong which is probably the most likely outcome!

What has made this even more problematic is that while there always model volatility from run to run there is usually some thread of consistency where you can figure out something. The volatility is so ridiculous that beyond this work week, it becomes almost impossible to forecast what is going to happen. The GFS seems to have more of a look of a strong el nino based pattern. The Canadian seems to reflect the Atlantic Oscillation flexing its muscle over el nino comepletely. The European doesn’t seem to know which one to key on so it keys on more el nino on one run and more Atlantic Oscillation on the other. Then add the usual plethora of renegade tropical storms which may or may not be there and you are left with a mess. So let see how it gets there and maybe that gives us a clue. 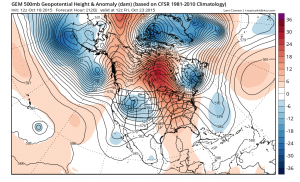 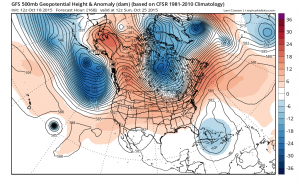 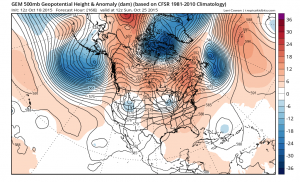 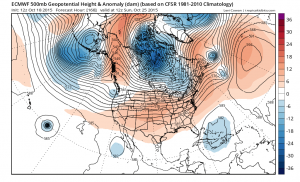 I think that what this ultimately boils down to is the action in the Pacific and whether we have a deep low in the Gulf of Alaska as shown by the Canadian with a breakaway jet that drives systems into the west as per the Canadian, or do we have the more benign look with just weaker systems coming into the west that just do their thing as they move across. Does El Nino or the Atlantic Oscillation dominate, or do they effectively cancel each other out? Im guessing that given all this flipping back and forth, that we are not going to have any of this resolved now. If you said to me guess, I would probably say that the Canadian idea is the least likely since it is completely contrary to the overall pattern we have been in. The primary pattern has been dominated by a ridge in the east so I guess that makes the GFS more likely or maybe the European idea which almost looks like a compromise of all three. In the end the long range is in flux in a big way and in this period of transition we seem to be in, every run and every model is going to take us on its version of a roller coaster.

Late afternoon update: New GFS model goes mega blocky after day 10 which only adds another part to this ridiculous outlook.

Freeze warnings are up so check the severe weather page for the latest on this. We saw snow flurries today as the core of the cold air arrived which was nice since I mentioned that possibility a few days ago. Always makes a forecaster feel good when he takes a chance on something at it works, even if it is for a cheap thrill! Stay tuned for more over the coming days.

Of course for accurate short range specific forecasts download my weather app and subscribe to my forecasts. The app is free and a subscription is just 99 cents a month or less than a cup of hot chocolate during these cold fall nights. Available for android and I Phone.