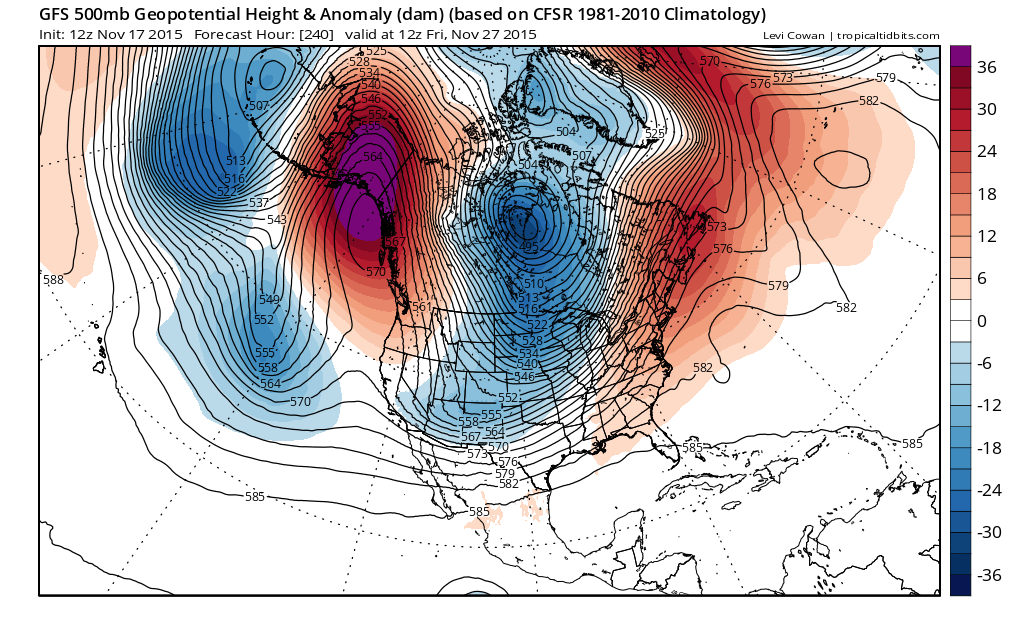 Earlier today I posted a video of the GFS model which has made a radical departure from the other models. In fact the models today offer 3 entirely different views of what happens beyond Day 5 which would be Sunday. Each keys on something else in the atmosphere. Each gets to a different place by day 10. And the GFS gets to a very different place by day 16. Now I want to emphasize that the model specifics in terms of what it shows is not what I’m aiming for here. What I am aiming for is trying to figure out just exactly where we are headed in the next several weeks in a general sense. I want to first address the issue of early next week. Here we have the models at 144 hours which is next Monday morning. The reason why this is important is that the GFS takes a radical departure here with a follow up system heading out of Canada and into the Great Lakes. The model digs a trough (to some extent) from the Great Lakes to the Southeast US. All the models show this second system which follows up the one that moves through the northeast on Sunday however the Canadian and European are much slower and much further north and flatter with it. The GFS is very aggressive with its idea and this would result in a coastal low probably offshore at least literally. However depth and speed are in serious question here as is whether this is real or or not. The gfs has a weaker lead system for Sunday that gets out of the way faster than the other 2 models which is probably the reason why the system behind it digs as much as it does. Further runs need to be viewed cautiously with regards to this. Perhaps we may know right away whether this is real or just noise.

Now rolling along the differences get even wider by day 10 with the GFS and the Canadian having colder looks across North America. The European wants to redevelop the ridge in the east again with a deep trough in the west. The Canadian was with this European idea the last few days but has now flipped away from this today. Beyond day 10 we only have the GFS which has a cold look across North America with a series of fronts and progressively colder air masses. We really can only guess about the other 2. Bottom line is that the models seem to want to go colder longer term but there is too much volatility from run to run to gain any kind of confidence beyond early next week. My general feeling is that next week overall will be near normal to below normal temperature wise especially the early part of the week. ‘Im intrigued by the gfs possibility for Tuesday but I’m not at all sold on it yet because the look it gave was such a departure from prior runs, though I will say that some of the other models in their ensemble groups were showing this idea over the last few days. Finally all of this will probably hinge on where the North Atlantic and Atlantic Oscillations are going in the next 2 weeks and those indices are also showing a lot of volatility from day to day..going to neutral and then some members going positive and then back to negative and others in reverse. I will update this later this evening when the late afternoon GFS comes out and perhaps makes things clearer…or not.