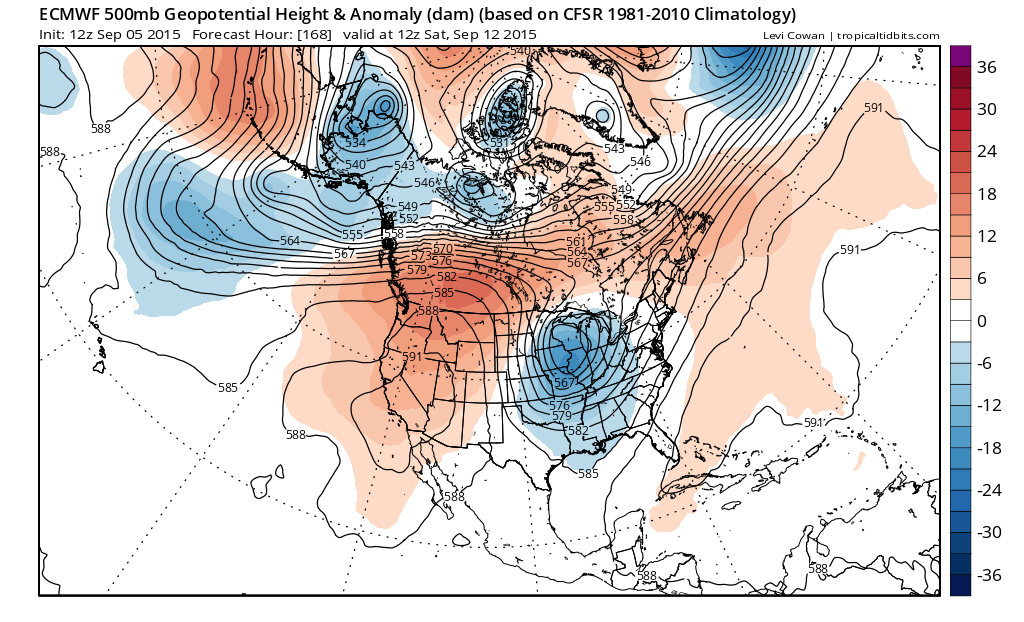 One of the benefits of my new website is that you can go back and read past posts as everything is archived now in this blog format. The last few days Joestramaus has been dealing with models in the long range forecast going all over the place on the overall pattern. Today is no different as we have another flip into a rather dynamic pattern across the US if this is real and i have my doubts on both the European and the GFS. Part of the reason for this is twofold. Models tend to be volatile when a pattern change is underway keying on different elements. We also have Pacific hurricanes which may or may not strengthen the low in the Gulf of Alaska which forces a ridge in the west and a trough in the east. Take a look at the latest long range mess presented to us today by the models. The ideas are similar with both models showing troughing in the east but the European is much stronger and deeper with a digging upper low into the western Great Lakes. You have to have doubts on the European given that this is so radical from what we have seen over the last few months. By 168 the biggest difference in the two models is how it handles what is going on in the west. The European has a strong ridge building in the west while the GFS has troughing coming into the Canadian northwest which cuts the ridge down. With the European having a stronger ridge it allows the western Lakes upper low to continue to dig into the midwest. The jet stream winds begin to back along the east coast (if that is right). The outcome at 192 hours which is next Sunday is astoundingly different on the European which has a very deep upper low in Illinois in a strong trough along 90W whiel the GFS cuts the next disturbance into central Canada which weakens the trough in the east to a large degree. The difference is extremely important because the European opens the door for a number of possibilities regarding rain here. The GFS would mean some rain here late Thursday and lasting into Saturday followed by dry conditions. The Euro with that large upper low would imply the same except that it has another area of rain approaching for later in the weekend, although the model winds up shearing out the upper low and much of that rain would go to our west.

What do we conclude from this? Well not much really because it is hard to get a grasp on models that keep flipping in all sorts of directions from run to run. Then we have the Canadian model which basically splits the difference between the 2, At this stage the best we can say is that this is far from settled. It seems to me the European seems way overdone. The other models have perhaps a more realistic view. Then again tonight it would not surprise me to see another flip. The bottom line is that we know that at least it is going to get hot again beginning on Monday and lasting into Thursday. At this point with regards to rain, it has to rain eventually and at least some hints on all the models of a decent rainfall are being shown. The soap opera continues in the long range forecast.

To get all the past Joestradamus pieces just scroll down to the bottom of the page and click on the topics drop down menu and choose Joestramaus or any other page on the site and pull them all up and read away.