A Storm Surge Watch is in effect for Jupiter Inlet to Ponte Vedra Beach Florida.

Hurricane Isaias is rolling through the Bahamas today with 85 mph maximum sustained winds. It did not strengthen overnight and looking at the satellite picture and satellite loops this morning it seems to have a rather ragged look to it. Upper air westerly winds of up to 25 knots are creating wind shear conditions which are hostile to hurricanes and tropical storms. It would seem that any threat of intensification has passed and that Isaias will remain a minimal hurricane at best as it heads for the Florida coast. The main threat there will probably be from coastal flooding since we have seen an easterly flow for weeks and we are coming into to a full moon cycle. Also the ragged storm has very little going on west and south of the center and if the hurricane makes it barely to the coast or barely on shore, inland areas in Florida will get some rain and some gusty winds and not much else while the heavier weather stays confined to the immediate coast. 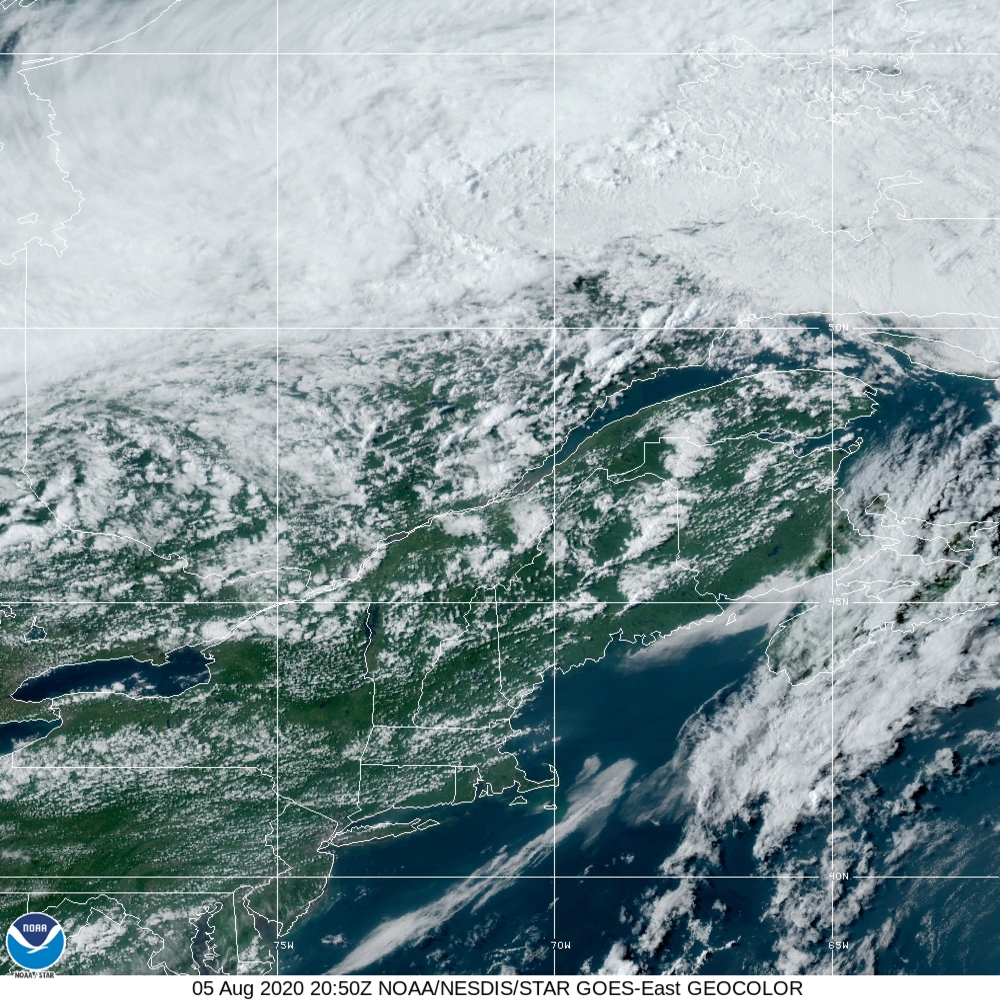 Weather conditions in Southeast Florida will start to deteriorate later today with the hurricane straddling the Florida East Coast tonight and Sunday. The center or eye will likely be bouncing off the shore line up the coast during the day Sunday spreading hurricane conditions northward along the immediate shore. Strengthening should not occur as it moves northward and in fact it might even weaken a bit on its journey.

There hasn’t been much change in the National Hurricane Center’s forecast for Isaias. The upper flow will turn more south south west along the east coast and Isaias will turn north northeast and begin to accelerate as either a minimal hurricane or a strong tropical storm with the next stop being the Carolinas. A landfall in Southwestern North Carolina is likely Monday night.

From the Carolinas all the models remain on course for a north northeast track with tropical storm conditions spreading up the coast Monday night and for Tuesday. Tuesday will be the main threat day from Isaias. It will be a 6 to 8 hour period of rain and wind. Here is what you can expect to occur and the approximate times.

What usually happens with tropical cyclones as they move northward is the heaviest rain tends to fall to the west of the track and the center , while the strongest winds tend to be to the east of the track. Using the ICON/European model idea as it matches well with the National Hurricane Center’s timing, you can expect the heaviest rains of 2 to 4 inches (locally higher amounts). Note that east of the track you wind up with 1 to 2 inches or even less.

As far as the winds are concerned the models we are using here have a track just inland of the coast which would bring the strongest winds from the Delmarva Peninsula northward up the New Jersey coast and from NYC eastward across Long Island and Southern New England. This is where we might see winds of 30 to 50 mph with some higher gusts.

The map above shows the surface low and the forecast surface winds for 8pm Tuesday which means that winds will be increasing during Tuesday from south to north. The map below shows the winds 3 hours later at 11pm Tuesday with Isaias over Sandy Hook New Jersey with strongest winds to the east and northeast.

As we get closer to Tuesday we will continue to zero in on the specifics on what to expect. In the meantime we have a nice start to the day with lots of blue skies and sunshine and it will be a warm and moderately humid day with highs in the 80s. To the south and west we have clouds and a warm front will be headed northward tonight.

We don’t expect much in the way of a shower or thunderstorm today but as the warm front moves northward tonight there might be some scattered showers and thunderstorms with it, mainly inland. Most lows over night will be in the upper 60s to middle 70s.

Sunday tropical air surges up the eastern seaboard priming the atmosphere for the arrival of Isaias on Tuesday. Sunday will be very warm and very humidity. The tropical humidity will make it feel like Florida with sky conditions to match. Deep blue skies, sunshine, lots of interesting cloud formations, and the chance for showers and thunderstorms developing. The Storm Prediction Center has us in a marginal risk of severe with slight risk in Northeast Pennsylvania and Northwest New Jersey northward into the Catskills. Sunday’s highs will be in the 80s. Monday we will probably see some sun and high clouds with highs in the low to mid 80s. We could see some showers Monday night into Tuesday well ahead Isaias which will come barreling up the coast later in the day Tuesday and Tuesday night. If it goes according to plan by Wednesday morning daybreak it should be gone and weather conditions will improve rather quickly.

For those of you who live near immediate coastal areas especially Long Island, ocean low tides are early in the afternoon Tuesday and high tides are late evening. We are coming off a full moon with peak tides on Monday. Bear this in mind along with the track. If the center passes to the west of Long Island it means a south wind and the low timing coming around peak high tide.