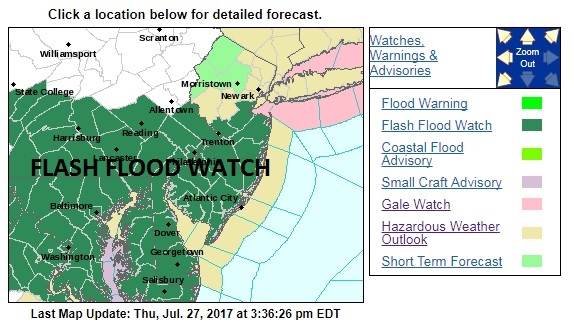 The National Weather Service in Mount Holly has issued a

* Showers and thunderstorms with heavy rain will develop starting
Friday afternoon and will first move into northeast Maryland,
Delaware, southeast Pennsylvania, and southern New Jersey,
before lifting north towards central New Jersey. Additional
waves of showers and thunderstorms with heavy rain will then
continue to impact these same areas Friday night through
Saturday afternoon. Rainfall amounts during this time will
generally range from 2 to 4 inches, but training of
thunderstorms may result in significantly higher amounts.

* Heavy rain falling in a short period of time will result in
rapidly rising water levels along streams and creeks and in
areas of poor drainage. Significant roadway flooding may occur.
It is also important to note that heavy rain will fall over
areas that already received several inches of rain early this
week, so it will not take much for flooding to occur.

The National Weather Service has posted a Flash Flood Watch for the southern half of New Jersey along and South of Route 195 and through much of the southern half of Pennsylvania along & south of Route 78. Rainfall from this coastal low will be substantial and it comes over an area that has seen significant rain over the last couple of weeks so it won’t take much to cause flooding. 2 to 3 inches of rain is likely and some models are producing isolated excessive amounts of 4 inches or more but forecasting this exactly is almost impossible. Rainfall amounts north of this area should be less but a slight northward shift could bring rains further north and open the door to the potential for Flash Flooding. For areas where the Flash Flood Watch is posted which extends from Southern New Jersey westward and southward,  some rain will develop during the day Friday. The NAM model this afternoon has a fair depiction of what radars should look like later Friday into Saturday.

The NAM 3 is on the extreme side of the rainfall. Given the dynamics we will be dealing with excessive amounts for somebody are possible. The NAM 3 also pushes the northern extent of the heavy rain further north to Northern New Jersey (except the Northwest) and over NYC & Long Island. This needs to be watched closely. Timing remains for rain to start mid to late afternoon South Jersey and then spread northward to NYC by midnight with very heavy rains into Saturday morning. Saturday afternoon the northern area of the rain moves northeast but in Central & Southern New Jersey the rains continue for the rest of the day.

All of this is going to hang on the behavior of the upper air storm system and the resulting surface low. The moisture inflow off the Atlantic is strong on all models. It is a matter of how far north the heavy rains get. The slow moving upper air storm lingers along the coast which means that clouds at least linger into Sunday and so does the chance for lingering showers.