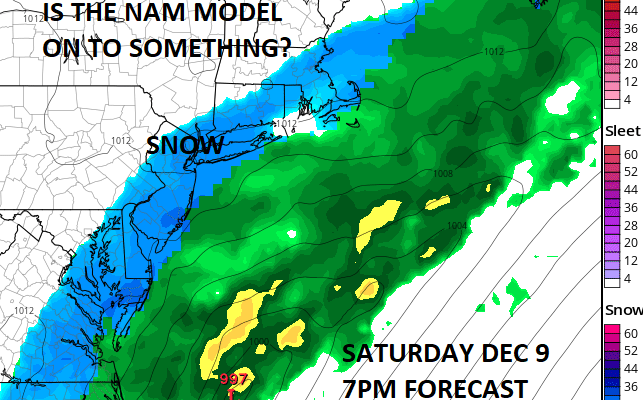 Last night’s cold front has done what it was supposed to do and that was to bring a decent amount of rain to the area after a 12 day dry spell. Now we begin the slow stair step decline to colder than average temperatures for this time of year which will dominate the pattern for much of the time over the next 2 weeks. First things first is that the cold front is already slowing down and we have a lot of leftover clouds to chew through this morning as the back edge of the clouds extends back into Eastern Pennsylvania. Those clouds should sink south and eastward with time. The frontal boundary is going to stall soon and there is a stream of subtropical moisture running eastward from Texas to the Southeast US. Look for temperatures today to hold in the 40s and eventually settle in the upper 30s to near 40 by days end. Clouds should thin out from west to east as the day wears on.

Regional and local radars show the showers well offshore now and moving eastward. There should not be anything shower wise or snow shower wise for the rest today through Friday evening at least.

Skies should clear out to some degree tonight though the cloud line will be just to our south and east over South Jersey and just south of Long Island. Lows will be in the mid 20s to lower 30s by Thursday morning. Thursday will be no worse than partly sunny with highs in the low to mid 40s. Then look for clouds to increase Friday as our attention shifts southward to the stalled front and a series of waves developing on the front. Temperatures Friday probably won’t get out of the 30s.

PROBABILITY OF 1 INCH OF SNOW THROUGH SATURDAY MORNING Late Friday night and Saturday a wave will be passing to our south and east. It should come close enough to graze coastal areas with some snow. The National Weather Service probability of snow map has a greater than 30% chance of an inch of snow in the dark green. I disagree with this at least though Saturday morning and I also think it is too far northwest. On the other hand some of the models are rather bullish with the melted liquid amounts from this wave through Saturday evening The new NAM model is bringing snow from Central New Jersey to Long Island overnight Friday night. The new model cycle is beginning now and we will update everything later today. If the NAM trend is correct expect a snowfall forecast map later today for late Friday night and Saturday.