We are sitting in between two weather systems, one to the northwest moving into the Great Lakes. The second is moving across the Eastern Gulf States and off the southeast coast of the US. This second system will eventually absorb the energy from the Great Lakes system. The result will be a major ocean storm that will develop well east off the Mid Atlantic coast and have little consequence to our weather other than some rain and snow showers and gusty winds later Friday into Saturday.

In the meantime today it is a sunny start to the day with much of the cloud cover either well south or well north of us at least for time being. Temperatures are in the 40s and will reach the upper 40s and lower 50s this afternoon with nothing more than sunshine giving way to arriving clouds. 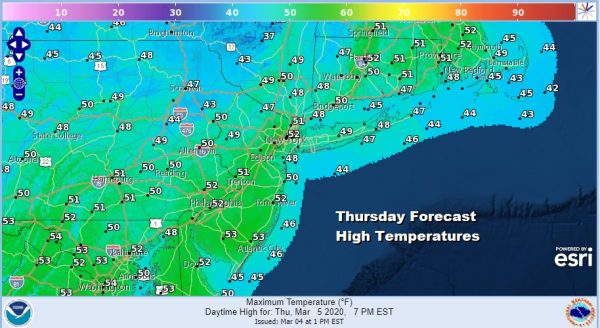 Friday sees the developing low off the North Carolina coast and the Great Lakes low disappearing with the coastal low taking over. Look for clouds around with gusty winds developing later in the day and Friday night. There will be some rain and snow showers developing on Friday with snow mainly in Northeastern Pennsylvania northeastward into the Hudson Valley mainly north and west of the Hudson River. 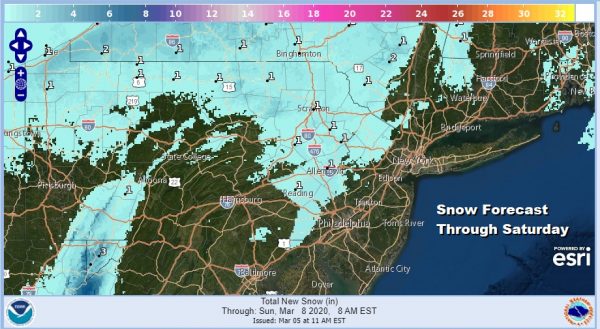 It really doesn’t amount to much here. There isn’t a lot of cold air around to begin with. Total precipitation amounts will be a quarter of an inch or less and all of this precipitation is being generated by the upper trough while the coastal low shoots out to the east northeast and well offshore. Temperatures Friday will likely top in the upper 30s well inland and low to mid 40s everywhere else.

This leaves us with improving weather conditions over the weekend with sunshine back on Saturday with highs in the upper 30s to mid 40s. Then a warm up gets underway leading to spring like temperatures beginning Sunday and then going full force for Monday into Tuesday.

We should be into the 50s everywhere Sunday with sunshine. Winds will go west south west with high pressure moving off the Carolina coast. Monday the high still holds on with sunshine and highs reaching the 60s and I think some warm spots could approach 70 (well away from the ocean). 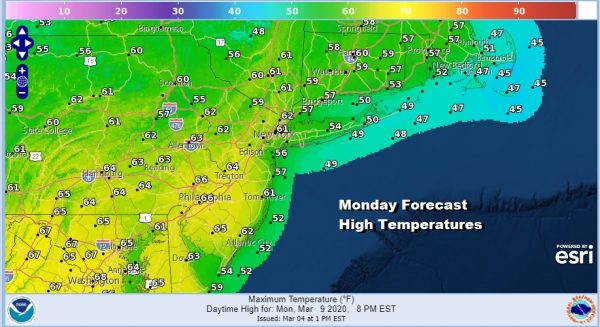 Tuesday we start the ball rolling with the next cold front approaching and the chance for showers. Temperatures will reach the upper 50s to middle 60s ahead of the front and then it turns cooler behind it for the rest of the week. Then comes the next 2 weather systems that will be rolling along in the flow.

At least the way the GFS model breaks this down today we have some sort of lead low indicated for later Wednesday and something more important for Friday. This is a bit of a change from prior runs of this model which we going bullish on a sizable snowfall for the end of next week. We didn’t accept this as a viable possibility and we still down as it goes against everything we have seen this winter and the fact that nothing in the upper air pattern has changed. We doubt the other models will support the notion of any kind of snow event later next week. Every time the models have shown this over the last 3 months, it has not come to pass a single time. Why should this time be any different.