Much has been made about the Arctic ice over the last few weeks. The ice melt fell to one of the lowest levels on records which only go back about 30 or so years. Nonetheless it is a near record low and there are some implications here for what is going to be watched very closely by some and that is the rate of snow cover growth in Siberia during the month of October. Why is this important? Well there are some who have connected the rate of snow growth in Siberia in October to harsh winters in the northeast. Such has been the case certainly the last 2 winters where the rate of snow cover expansion finished at multi year highs. Now how does this tie in with Arctic sea ice?

The chart shows that the arctic sea ice this summer (in the darkest blue) reached bottom about 2 weeks ago. It is well above the lows of 2012 but still the 3rd lowest on record. However notice that its now moving sharply higher as daylight begins to shrink very rapidly north of the Arctic circle and the refreeze is underway. The unfrozen Arctic Ocean is important to Siberian snow cover growth as an open unfrozen ocean is a vast moisture source. The idea is that the open waters will be tapped for additional moisture for snowfall until they freeze over. If the sea ice recovers rapidly from these lows it could shut of the moisture supply faster. Of course is all fine and dandy in theory but clearly there are other factors at play including the weather patterns everywhere else in Asia and in the Western Pacific not to mention re-curving typhoons and their impacts.

So where are we in all of this. First off the month that matters is not September but October. It is the rate of snow cover growth that is important. A high rate of growth is believed to mean harsh winters for us. So let us look back at 2 mid October maps from 2013 and 2014. 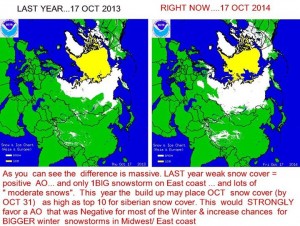 This shows the actual snow cover for mid October for the last 2 winters. Now let us see what we have so far as September comes to a close.

The maps above show snow cover on 8/21/2015, followed by 9/21/2015 and the third is 9/25/2015 and notice the big jump over the last 4 days over Siberia and also over Alaska and Western Canada. Again we are at the very beginning of this process and there is a long time between now and October 31, 2015. It will be interesting to see what if any impact El Nino has on all this. One of the issues last year was with some of the conclusions drawn from this and how they would play out in terms of weather patterns. Here the indicator had a problem since forecasts thought the atmospheric pattern would favor North Atlantic blocking to supply the cold. That did not happen. Instead it was the action in the Pacific that was the primary driver.

Now where are we with El Nino? Here is the latest sea surface temperatures anomaly. 2 things that stand out are the warm waters in the Northeast Pacific, considered the driver of the last 2 winters remains intact. Also of interest is the expanding cold pool in the North Atlantic and what impact it might have with regards to the North Atlantic Oscillation or the Greenland block, which displaces cold air southward into the east.

In effect what I have given you here is the pre game show. The players El Nino, Siberian Snow Cover, Arctic Ice, NW Pacific Water Temps, and North Atlantic Water temps. We are about to begin the first quarter!

SHAMELESS PLUG ALERT: Be sure to download my weather app and subscribe to my forecasts. The app is free and a subscription is just 99 cents a month. The app is free from advertisements and there are no security or tracking issues.